In memory of one of the most extraordinary events of World War 1, The New Born King (Christmas Truce 1914) remembers the truce which took place on the freezing battlefields of Flanders, as German and English soldiers ceased fighting, lay down their weapons and met in no-mans-land in the midst of one of the most horrific wars the world has witnessed.

Research documents include the eye witness accounts of regimental war artist Bruce Bairnsfather, and records from the Royal Warwicks and North Staffordshire Battalions.

Exactly 100 years ago on the 24th December, 1914, soldiers disobeyed their commanding officers, and for three precious days stopped what has since been the called the ‘war to end all wars’. Ordinary soldiers, singing Christmas carols to each other, exchanging gifts, and calling to remembrance of the birth of Jesus Christ, who came to bring a message of peace that a world in turmoil still needs to hear.

This modern carol is particularly relevant today, and has special importance the composer; five of his family members served and fought in WW1. 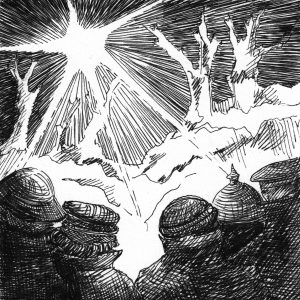