“This album is my most honest work to date, and features one dominant theme; love and commitment in the face of life’s struggle. Each song is a real conversation with those closest to me. I’ve tried to connect the words with simple melodies and minimal production; much of the album was recorded at home in Cornwall and other locations including Somerset, Lancashire and Nashville Tennessee. The music nods towards bluegrass and folk, but is hard to put into any one box”

The album includes contributions from other musicians Hill has worked with before. Respected USA artist Phil Madeira plays Dobro. Phil recorded with Sam in Nashville, USA on Hill’s “Sunset Grill” album and is best known as member of ‘The Red Dirt Boys’, Emmylou Harris’s band and for the recent album ‘Mercyland’ where he produced The Civil Wars, Buddy Miller and The Carolina Chocolate Drops, to name just a few. Ivor Novello Award winning film writer Richard G. Mitchell co-produced the album, and some of Richard’s best known work includes the films ‘Gram Theft Parsons’, ‘To Kill A King’ and the recently completed score for “Moby Dick” starring William Hurt, Ethan Hawke.

‘Cowboys and Moonbeams’ was mixed by Alan Gregson who also plays guitar on the album. Alan has long been known for his work with Corner Shop and a host of other artists. 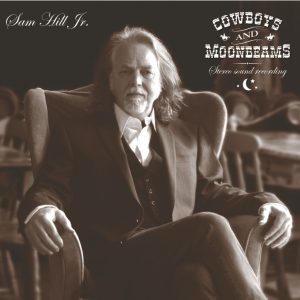